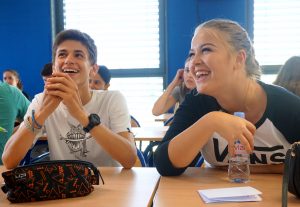 My name is Tanguy Meignier, I’m 15 years old, I live in a house in Décines. I study in Charlie Chaplin High School of Décines, I study science at school. My family is composed of my parents, Brigitte and Franck and my older sister, Marie-Amélie.

I’m French and I don’t have any foreign origins, I learn English and Italian. Hosting a person from Sweden was better than speaking with someone in English, because we could communicate more easily and if I didn’t know a word I could try explain with other words. Being face to face with Isa helped us to get closer .

At the beginning, we didn’t speak a lot but Isa is sociable , so she asked me a lot of questions, so we talked more and more. We became friends.

My parents speak English a little .I think the language barrier is not so important because my parents and Isa managed to communicate everyday. When she didn’t understand, I tried to translate or explain and with my sister, they would speak in English.

Participating to this exchange was so interesting because it brought me knowledge about a foreign culture. I now feel like traveling and finding out more about others. 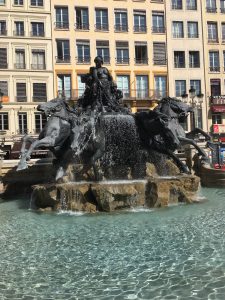 just outside a town called Köping with my mom, dad, and brother. I have lived here my whole life and I really enjoy staying here. I speak Swedish of course, and English, but also a tiny bit of German that I learned in middle school.

When we heard the news about being able to fly all the way to France to live with a French family I thought I wouldn’t be able to do it. So I said to my friends that I wouldn’t. A few weeks passed and I changed my mind. And I’m so, so happy I did. Because thanks to all of this I have made new friends that I never knew existed. I got to see how they live, how they do things and it was awesome. And that was probably what I

was excited about the most: to see how they do things and if there are any differences from how we do things in Sweden. And of course, just the idea of staying with an unknown family from a different country is exciting in itself.

The relationship with the family evolved quite fast, mostly because they were all so nice to me. The conversation came really easily. Of course, the first day was a bit scary, but that’s understandable. We really connected during the dinners we had in the evenings and when we went swimming. 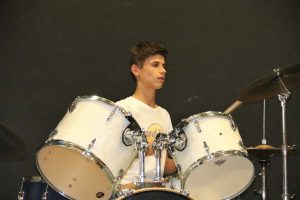 Of course one of the main obstacles was the language. But we overcame it easily by translating some words and showing pictures. Tanguy who I was staying with also translated if his parents didn’t understand. Something I was surprised at was how easily I understood French words at the end of the week, with one exception: ”d’accord”. This became an inside joke between the family and me because I said the word wrong a few times.

Something else that surprised me was how late they ate dinner; in Sweden, we 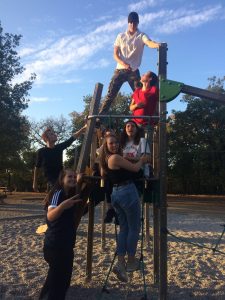 eat dinner pretty early. In my home, we eat around 5-6 o’clock and in France, we ate around 8-9 o’clock. Another thing that surprised me was that all the shops were closed from Sunday evening to Monday midday, even grocery shops! Some other big differences I noticed were in the school. Everything about it was so different from our school. For example, in the lunch cafeteria, they weren’t allowed to put the food on their own plates, but the kitchen staff did it for them. They were also just allowed to take one plate of food. In our school, we take the food by ourselves and we are allowed to eat as much as we want. They also had dessert options, like yoghurts, cakes or sometimes even ice-cream. In Sweden, we don’t have that, only sometimes. And more often we are offered fruit instead. 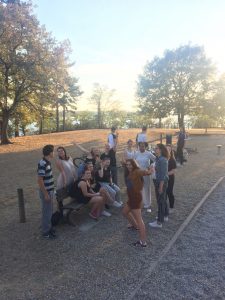 What I liked the most about Lyon was the people we spent time with there. But of course, the beauty of nature and the city also made the stay there even better. We just became one big family, and I can’t wait to show them Sweden. I can’t really tell any big differences between Lyon and Sweden. Of course, it looks different, and the food is different but overall I think it’s kind of the same. My overall impression from Lyon is good, and I miss it a lot already. This trip has meant a lot of different things for many of us but one thing is certain, we made new friends for life.