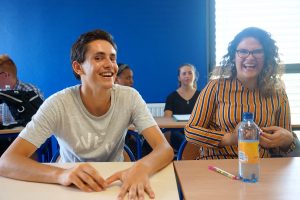 My name is Mattéi Bessardd I’m 16 and live in Décines with my mother Silvana and my step father Christian. I have Italian origins but I have alway lived in France with my sister Andréa who is 25 and moved to Paris four years ago and my older brother Jordane who is 28, has lived lives in Nantes for 6 years now.
Before Liza came we had not talked too much to each other, maybe because I was a bit shy. I was really looking forward to knowing her, to know how it was going to be, and to spend a week speaking English all the time. When I first met her at the airport it was a bit strange but quickly we became friends. Our age difference didn’t impact on our relationship even if she is four years older than me, she is very talkative just like me so it didn’t take long before we started talking about everything, her friends, my friends, politics, our future, quantique physics…

We always had something to do, during the week: water activities, visiting Lyon, school lessons, picnic in “le parc de la tête d’or”… and at the end of the day, when we were back home we played strategy games, watched a Swedish series and even read a French comic together.

What I noticed with the other Swedish’ students is that most of them look so far from us, and when we were asking them if everything was all right they were just saying “yes”. But they let us understand they weren’t used of so much noise and so much energy from the people. We have clearly seen it when we were doing sports’ activities, none of them were ever volunteered.

On the last day, one of them told me that she was going to miss the “French” noise back on Sweden, she was getting used to it. That made me happy, knowing that in just one week they would miss us, and the French culture.
This first part of this exchange was extremely interesting about culture, people, the world and many other things. And now the only thing I can do is to keep in touch and look forward to being in April, when I will finally go there.

My name is Liza Marshah and I am 20 years old. I originally come from Syria but now I live in Köping, a small town that is around 150 km away from Stockholm. I speak Swedish, English, Arabic, and a tiny bit of French.

This experience was one of the best experiences I have ever experienced. It was really exciting to have a French family as a host for a whole week. The food, the culture, the traditions, the lifestyle, the school system, and a lot more was very exciting to get to learn about.

The second we met the French, I started looking for Mattéi. I had no idea what he looked like. It was really strange at the beginning. I was shy and so was he, but then we just talked and talked all the time about everything from food all the way to the stars in the sky. We used to sit in the evenings and play fun games, we even read some French comics. It was really fun to get to know my pen friend.

The French family I lived with was very, very generous. We went together to a very old town from the middle ages during the weekend. One of the places we visited there was a rare art exhibition, which I found extremely astonishing. 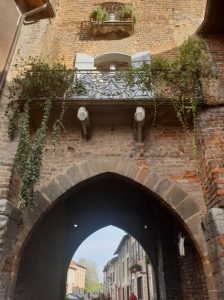 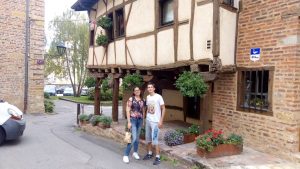 As a student, the huge difference I noticed was in schools. It was really strict with many rules to follow. We spent a day with them in school. It was a little weird because everything was in French, but also fun. During the French lesson, they were discussing a story from the classical antiquity, which I found really interesting because we went through the same story in my Swedish class. Even the mathematics class was fun, in which both of us solved the same mathematical problem but with different methods.

The French culture is very rich, classy and varied. It was astonishing to take a part of it for a week. I found the French very active, social, energetic, welcoming, and very nice. Most of the Swedish group were shy and quiet, which is quite typical in Sweden. French people are very polite. They use a lot of words to show respect while they speak, especially to the older ones, like Madame, Mademoiselle, Monsieur, vous, s’il vous plait, and so on.

I loved the French patisserie, and the French cheese. I got to try French desserts a lot of times, and the taste was very delicious.

At the end of the journey, all of the Swedish students became so energetic, social, and active. I kind of became a little sad going back to the quiet environment again. Leaving each other, while saying good bye with eyes full of tears is a quite good picture to show how everyone’s relationships evolved. Can’t wait to see you soon my French palls!