My name is Simon Gutgesell, and this is my experience hosting my French penpal Benjamin.

Since I live alone, finding a solution for my hosting was a bit troublesome. However, we settled on Benjamin and I living with a teacher. Because of this, I believe we both got quite a different experience from the others. The teacher which kindly hosted us is named Koresh, and he lived in a nice three-room apartment on the third storey on the other side of Köping. Except for us, he already had a girl inherent.

The most exciting thing about the hosting was to see Benjamin again. I had not seen him since I visited him in France 8 months ago. When I saw him at the airport I was reminded of the great time we had in France, and it was like we just saw each other yesterday. During the stay, our relationship developed further. I got to know him more and more, and we became closer as friends.

Something I noticed about the French exchange students is how active they are. They are always talking to each other, and something is always going on. We Swedes are much more passive and calm, and don’t talk as much. Perhaps it has something to do with the differences in climate; a cold insect is much slower than a hotter insect. Although we aren’t insects, I do believe we share this trait.

One afternoon when we were playing and discussing games on our laptops, I noticed an especially familiar icon on his dashboard: SolidWorks. It is the CAD-software our school uses, and apparently, his does too. Despite the cultural differences and despite the distances apart, we still shared knowledge about the same programs. It made me think about how much Sweden really differs from France, and I think it is less than we actually want to believe.

Overall, I really enjoyed the exchanges and I am glad I had the opportunity to meet and get to know a person of a foreign country and different culture. I believe this have made me more educated and open to other cultures. Thank you Ullvigymnasiet and Lycée Charlie Chaplin for arranging this exchange, and thank you Erasmus+ for sponsoring the project! 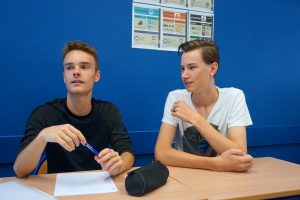 My name is Benjamin Boulet and I’m 16 years old. I live in Lyon, one of the greatest cities in France and for me, one of the most beautiful and more precisely in Décines-Charpieu. I speak three languages which are, French, German and well obviously, English and I live with my two parents and my brother.

I think that the most exciting things about this exchange with Sweden were to discover a new culture and new lifestyles. Indeed, they don’t have the same life way than us. I learned during this exchange that in Sweden they can eat five times a day, while in France we only eat three times a day for example or, that they give more help to the students than in France. I learned too, that in Sweden they are less strict than us because they don’t have the same thinking way than us. While in France we are very strict about what we wear at school for example. The people in Sweden are more open.

Then, with my penpal. Despite the fact that we had already spoken by messages before he came and where I found him rather nice, we were, in the beginnings of the exchange, both a little shy and we didn’t talk very much but little by little, over time, we start talking to each other and learning about us, our hobbies and others. Thanks to this, I’ve learned that we had the same kind of hobbies, like informatic or coding and that we played to the same games.

At home, it was a little funny for me and Simon because my parents don’t speak English and my brother a little, so it was my job to translate the questions and answers, we talked about a lot of things during the time in the family, we learned about him, his family, his tastes, his wishes, how is the life in Sweden and many others things. And by dint of doing this, it allowed me to improve my English level and my expression way. This allowed too for my parents to speak and understand a little English. So, this exchange was very benefited for me and a little for my family.

Simon was very kind and very nice, it was a very big pleasure to have him like penpal. And now like a friend. The other penpals were very nice too and we’ve shared a lot of cool moments with them, we amused, we laughed, we played and many others things. This exchange allowed me to learn more about me and to overcome my shyness a little more.

Now it’s our turn to go in their country and I think it will be very nice and very positive for us.

My name is Simon and I am 16 years old. I was born in Uppsala in Sweden, but when I was four years old we moved northwards to Örnsköldsvik, and in 2017 we moved back south to Köping. I speak Swedish and English fluently, and I have also studied four years of French.

The most exciting thing about the trip to France was probably everything. Never had I ever flown before, and never had I ever been so far away from home. So I really had no idea what it was going to be like down there. And I must say that I got positively surprised by how it was: everything was different, yet similar. My host family was very kind and welcoming; they told me to feel at home. At first, everything was sort of unfamiliar and unusual, but as time passed things started to feel more and more casual. 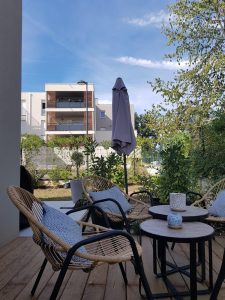 In the picture to the left is my exchange my student’s family’s patio, which covered more or less all of their tiny garden. Around the garden, there was a fence which was at least 2.2 metres high. Fences were not an unusual thing there, in fact, every garden I saw during my visit had a wall or a fence along the outside of the garden. Even the school was enclosed, and just outside the windows and doors of the house, there were security blinds, probably to prevent burglary. Furthermore, there were guards checking bags at the entrance of about every museum. This shows that the French’s security is more well developed compared to Sweden’s. Though it might be needed since France is a way bigger country and inhabits more people than Sweden.

A challenge we met during the visit was communication. Most French only knew a little a bit of English, and I only knew a little bit of French. So naturally, Google Translate was used a lot. They were also a bit more outspoken compared to us Swedes, as well as their actions. They were always running around and shouting, not in a bad way but in an unusual way for us Swedes. In fact, it affected me, and I also became more energetic. However, the school benefitted from all the extra energy and had extended school days. If you were unlucky you could start a day at 8AM.

Walking around in Lyon was an amazing feeling: all the houses were 4-5 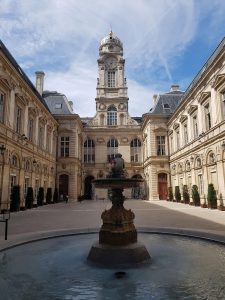 stories high and richly decorated. In the old parts of Lyon, there were narrow alleys lined of small unique boutiques with unique products. There were big squares with amazing fountains, and every single house I saw was in some way aesthetically appealing to look at.My overall impression of France and Lyon is overwhelmingly positive; in fact, I would almost rather have stayed down there than going back home.