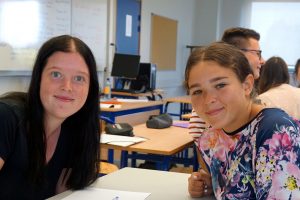 My name is Mélina Guiddoum andI am 15 years old. I live in a house situated in Meyzieu with my mother, my little brother aged  12 yo and only the weekend with my sister aged  18 because she studies in a boarding school.

For me the most exciting thing about hosting a person from Sweden was to discover her habits. I hosted a  penpal from Germany so I knew what to expect .But it was very interesting to see the differences.

During the stay my relationship with Linnea evolved a lot. In  the beginning it was complicated because Linnea was sad and very shy but with the time and activities, she became less shy.

Before meeting Swedes  I thought that  they all had blond hair and blue eyes. And it’s only half true  , Another thing, I noticed that the Swedes don’t eat a lot at lunch but a little bit all day long and more sweet things. Again about the food habits ,I don’t know if it’s true for all the Swedes but Linnea was fond of cheese. Also,  during the week we  could see that they are very calm contrary to us, the French people are always noisy and excited. But it’s our way of life and we see that the Swedes were shocked. But don’t worry we will make less noise in Sweden !

I look forward to learning about the Swedish culture when I come in April. About the school I’ve understood that it is completely different  too.

About the interaction with my family it was cool, my mother spoke with Linnea and I all at dinner times. She met my little cousin who he is a baby, and Linnea loves children. She was very happy when I told her that he would come.

In conclusion, my overall impression is rather positive. This exchange is very interesting because the Swedes and us are very different. So it’s very enriching to discover other ways of thinking  and lifestyles. 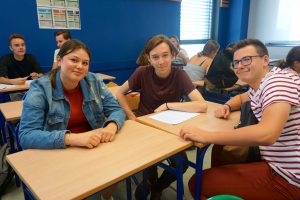 Hi, I’m Malo FAURE ! I’m French and I don’t have any foreign origins. My home is located in Meyzieu (a town near the school). I live with my parents, my brother only comes back weekends. I speak english (I’m actually learning) and a little bit of chinese and italian.

The most exciting thing about hosting a person from Sweden was to met a new person with a totally different culture. I was also excited about talking in english with an english-speaker.

My swedish penpal was Johanna. She was very nice and funny. She chatted with me easily. Our relationship was so cool from the start to the end. From the first day, Johanna, my brother and I played music together. We also biked sometimes and we talked a lot together. All those moments were very pleasant ! Every morning we had to take the bus so it was a good moment to discuss. We spent so much times in transports but it was funny !

My parents and my brother talk well english, so it was a bit easier to interact with Johanna. They were very happy to host her one week too. They told her some funny things many times.

During the week, I surprisingly realized that it’s almost the same culture between Swedish and French. Indeed, I didn’t notice some big differences.

Obviously, we don’t have the same way to behave and talk. We also eat more !

To conclude, this week was incredible ! We learned so much things about each other and we laughed a lot ! Activities were also very cool and interesting. French and Swedish pupils get along very well. Swedish pupils were very friendly and cool ! I enjoyed to be with them.

Personally, this week will stay in my mind. Those kind of exchanges are good for young people like us because it shows us how live other people in the Europe and what are the differences between us and them. It helps us to have an open-mind to the world.

I thank you teachers from Sweden and France for organizing this week ! 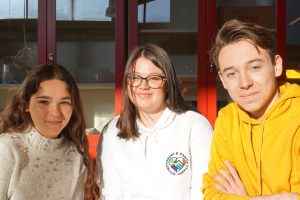