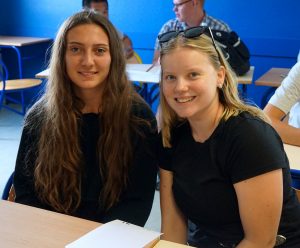 I’m Manon VINCENT, I’m 16 years old and I study at Charlie Chaplin high school. I live in a house situated in a lovely neighborhood close to the « Grand Large ».  My town Meyzieu, over 32 000 inhabitant. It’s in the suburbs of Lyon with my parents and my sister Justine (she is 18).

I’m French so  I speak French, English and German( and now I can introduce myself in Swedish !)

To my mind, the most exciting thing about hosting a person from Sweden was to discover a new culture, it’s important to be open minded and curious. Discovered another culture than mine was very interesting, but the most exciting was to meet in the Hanna for real.

When Hanna arrived in France we immediately got along well. We already knew each other because we talked a lot together before she came (by snapchat, Skype…). So we just became closer during the week.

I think the most surprising thing was the difference in the food habits. Compared to the Swedish people, we eat a lot of sugar. Besides, they eat smaller portion than us, but more frequently, and they eat earlier, around  6 PM

We have lots of things in common with Hanna. We both really like listening to music, so, I discovered some Swedish artist that I had never heard about . Besides, we both have a great passion for fashion ! So, we spoke a lot about the fashion styles in Sweden and in France.

Yes, all my family spoke English to Hanna. My sister is good at English, so it was not that difficult for her. My parents tried to speak English and I was like the translator sometimes, but we noticed with Hanna that they improved their English during the week.

I think that this exchange is a very interesting thing. It is so cool to communicate with someone who doesn’t know your language and vice versa. Besides, I made a very good new friend and now I can say that I have Swedish friends ! 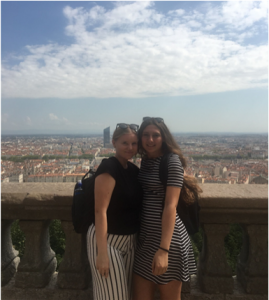 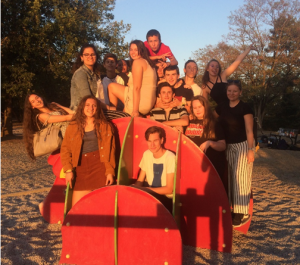 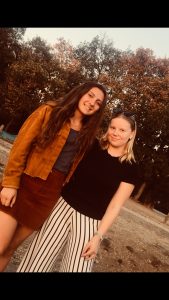 My name is Hanna Malmstedt. I’m from Sweden and live in a small town called Köping. I speak Swedish, and of course, I speak English too. I think it’s great to get the chance to try living in a French family, getting a taste of what they eat and how their culture differs from our culture.

Mine and Manon’s relationship became stronger when we got to know each other when I lived there. We talked a lot and learned more about each other’s cultures. We had good contact before I got there but it became much better when I stayed there. I thought it was difficult when it came to food routines in France compared to Sweden because they ate twice a day while we in Sweden can eat five times a day. In Sweden, we eat dinner around 5-6 o’clock, while in France they have dinner at 8-9 in the evening.

What I was most overwhelmed by was that everyone in the class had such good contact, and there was no difference between girls and boys like it can be in Sweden. In Sweden, you hardly know the guys in the class. In Sweden, the guys are usually by themselves and the girls by themselves, but in France, everyone could have fun together and meet after school and just hang out in a park. I learned that the French people have a great respect for each other and that they are very nice to one another. The French people have a lot of energy and are a very active and sporty people, according to me.

There were incredibly big differences between our schools. The French school seems to be a lot more stringent and has a lot of security. The school is surrounded by gates and the gates are only opened a few times and if you arrive late in the morning you will get in. All students must bring a book to school to enter. The book serves as an ID and proves that you go to that school. The students also had to open their bags before they came in. There was also a mobile ban on the French school, and we Swedes had a little hard to getting used to it because in Swedish schools it’s okay to bring the cellphone. However, I agree that you should not use the phone in the classroom but for security reasons, you should be allowed to use it in other places. There were also big differences in clothes in school. The French did not have any clothes that had any religious symbols, e.g. crosses.

The difference between Stockholm and Lyon is quite big. It seems that Lyon is a little older and that Stockholm has a certain vision of the future in some way. My experience in France was that it is an incredibly beautiful country and with wonderful people who were nice and very welcoming. It was fun to have the chance to live in a French family for a week and taste various French dishes.

Thanks to Manon and her lovely family for a nice welcome. I look forward to welcoming the French to Sweden and showing them our country.