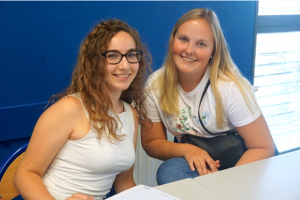 My name is Elora, one of the French students who has been hosting a Swedish pupil for a week. I live in a small town not far from Lyon, the second biggest town in France, and place of interest to discover French culture. Indeed, not being as touristic as Paris, Lyon offers plenty of opportunities to mingle with French people and immerse into their culture. The town I actually live in is called Décines, which is mainly residential. My house is situated near the river embankment, in a calm area. I live with my two parents only.

Although I have been living in France my entire life, and speaking French only, my culture is partially foreign. Indeed, both my parents were born and raised in Algeria, northern Africa. Therefore, they speak both Arabian and Kabylian (a Berber language), as well as French. Language is not the only hint of Algerian culture at home: our cooking and ways of eating are slightly different from the  French ones too. As an example, there are some dishes we eat with our hands, and some we eat on a shared plate, which is pretty uncommon in France. Notwithstanding, our ways of living are representative enough of French culture for a foreigner to discover it on our sides.

From the beginning, I was very excited to host a foreign pupil, especially a Swede, as Sweden is a country I know very little about. To my mind, this was a foreign country so far away that I could not figure in any way how was life there, and how its people live. The week we were going to spend together seemed promising and full of discoveries, as a sort of holidays. I was curious to see how Aisha, my penpal, and I would interact.

At first, I guess our relationship was a bit shy, which is fairly natural, we were nervous to meet each other for the first time. Aisha was even shyer than I was and did not say much at first. I tried to break the ice by being a chatterbox.  I was anxious, for I did not know if she was going to feel comfortable with my family and me, but luckily, we did manage to get at ease with each other quickly. Day by day, our relationship improved significantly. I am glad to say that we were and still are able to talk about plenty of subjects on various themes and share our opinions without fear.

Still, there are a few things that startled me about the Swedes’ behaviour. The fact that they call their teachers by their first names, and address them in an informal way. This is considered very disrespectful in France. I believe it creates a climate of friendship and a closeness that does not exist in our country. Though our relationships with teachers are « colder » in the eyes of a Swede, as French pupils we do not mind that fact and still can create bonds with our teachers.

My penpal Aisha is only half-Swedish. Indeed, her father is an Englishman, therefore half of her personal culture is not Swedish. Plus, she did adjust herself well to the French functioning. So, what I learnt from her about Swedish culture was what she told me, mostly about school, society and a bit about politics, such as the fact Sweden is a monarchy when France experienced a revolution against it centuries ago.

As I said earlier, none of my parents speak English. My father attempted to communicate with Aisha, with more or less success, but my mother could not at all. Nevertheless, there was no tension, they all took this clumsy communication with good humour. Apart from the moments when I translated, they merely tried to understand each other with gestures. My siblings (two older brothers and a sister) speak English fluently, but they do not live in my house anymore. Had they, Aisha would have had a bit more varied conversation; unfortunately for her, there was only me to speak with.

To conclude, I would say that this week was very rich and full of promises for the development of this project. I am glad that I have created a new friendship with Aisha, as well as with the other Swedes I met. I look forward to spending a week in Köping next spring!

My name is Aisha Cooley and I’m 18 years old. I was born in Västerås outside of Köping (Köping is where I live right now). My father is from England and my mum is Swedish and Finnish. That means I can speak fluent English and Swedish and also a little bit of Spanish.

When I heard about the trip to France; staying with a new family and learning 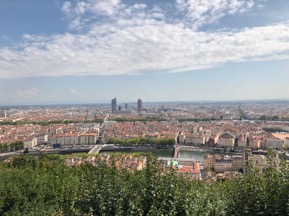 about French culture, I knew I couldn’t say no! I knew this trip would be a journey that I would always remember. When I read Elora’s letter she seemed super funny and smart and after meeting her I can only say that she is wonderful, smart, beautiful and my friend for life. I was so excited about flying over to meet Elora and her family. I loved Lyon, the environment, all the buildings and I would really like to go back there again. The shopping was amazing and the bagels we ate were delicious! Please take me back to France, the French food and the French people! The pretty painted walls, the beautiful churches, and the city were so amazing. 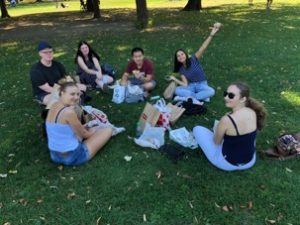 I agree with what Swedish Simon wrote: ” The most exciting thing about the trip to France was probably everything ”. Staying with an unfamiliar family that I had never met before was quite unnerving but still very exciting. Seeing their food habits and also experiencing them was super interesting because they eat much later than my family in Sweden. The only challenge I met was the language since I can’t speak French and they can’t speak Swedish. Everyone spoke English with each other and if someone didn’t understand something we could ask our friends and they could explain or translate. In the beginning, many of the Swedish people talked Swedish and the French people talked French, but it got so much better at the end of the trip.

When we landed in Lyon and got our bags everyone was so nervous. We could hear people screaming and shouting behind the walls and we were wondering what that could be. But as we walked out the doors we received such a nice welcoming from all of the French people. Elora ran towards me and gave me a big hug and I got to meet her father. Her father drove us to their house and both Elora and I were nervous but we talked the whole trip. And I guess that from the moment we woke up until we went to sleep we couldn’t stop talking. I really enjoy Elora’s company.

I got really surprised by their school system. It was much stricter than our school in Sweden because their school was surrounded by metal gates and their teachers checked their bags before entering the school. But I don’t complain because safety is very important regardless of where you live. Also, the students can’t use their mobile phones as long as they are inside the school. In Sweden, we use our phones and computers all the time, which is very distracting sometimes. They also had to pay for their school lunch and they got their food served by staff. When they speak to their teachers they may not use the teacher’s first name, as we do in Sweden. Here we even have nicknames for some of our teachers.

I would like to say thank you to the French people for taking so good care of us. We really enjoyed the trip and we can’t wait to welcome you to Köping. You are very generous and kind and you all have big hearts, especially Elora and her family. Thank you for everything.