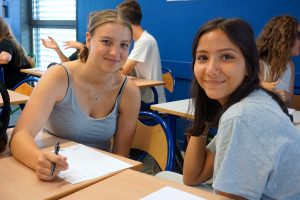 Hello, I’m Lina Jaber and I’m French. I will be seventeen in january. I live near Lyon in  Décines.It’s a lovely town where you can find anything you want; there is a cinema, a library, an high school, a swimming pool, and I could on. I live in Décines since I was a baby, I grew up in this town so I kind of like it here.

My family is composed of 5 people; my mom, my dad, my two elder brothers and me..

I obviously speak french . I ‘ve studied English for 6 years now, also thanks to the netlix series, I  study Spanish too. Even if I’m not sure I should put this fact in the “languages spoken” part, I can understand some arabic ,unfortunately I can’t speak it vey well, because my dad  was born in Morocco, I usually spend my holidays there to visit my family.

I was really thrilled about doing this exchange, but  I was also wondering. How I would get along with Rebecca, or if I would cross the language barrier… Also, before the exchange, I really didn’t know much about Sweden, so I did some research, about the town, or the famous people for example. But I would say that the most exciting thing, was to discover new people, from another country, with another culture.

I was really happy when I first talked to my penpal, Rebecca, because we could understand each other quite well and we directly started to talk naturally. We enjoyed talking about the things we like, and the things we don’t like. We also appreciated to “compare” our lives and habits to find out the similarities and differences.

The biggest cultural difference I noticed was the eating habits. As French, we are used to having three main meals. The Swedish students told us that they prefer to eat little snacks throughout the day whenever they are hungry. It sometimes was a problem, because from time to time they were hungry and we were not.

I did learn a lot about their culture and their life of Swedish teenagers. For example, at the end of the year the have a ball (“prom”) like we can see in American movies. They also told us about the functioning of their high school. We learnt that in Sweden they have different bounds with their teachers;  they can call them by their first names.

My name is Rebecca Lindberg and I’m Swedish. I am eighteen years old and I live in Sweden of course, in a little town named Köping. It is close to not only a city but also to the capital of Sweden. It’s about half an hour to the nearest city. According to me, I think that Köping is a really boring town but it is cozy.

I was so excited to meet Lina and her family, because we had only been writing to each other, so I was curious to see how they were living and what the school was like. 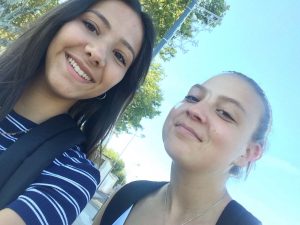 I was so nervous to come and stay with their family because I didn’t know if Lina and I would agree with each other. Already from the start when we first met, it felt like we had known each other for a long time. What I mean by this is that the conversation went as smoothly as it could have and we became friends really fast.

to. It took some time to get used to it but in the end, I could stand it. In the beginning, the family was a challenge because I didn’t know how to behave but after just a couple of days, I realized that it was just me being nervous.

The biggest surprise was how beautiful the town was. Then how fast Lina and I connected, how the school system works and what rules the French have. I was scared and surprised by how they greet each other and how forward they were because we in Sweden are so stiff all the time and don’t greet strangers. 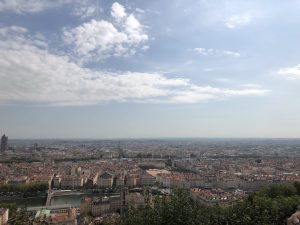 I like how beautiful Lyon is compared to Sweden, and how nice the people are to each other. I noticed that there are a lot of apartments in Sweden but in Lyon, I didn’t see as many. There are more houses there.

I’m overwhelmed by the whole experience. It has been so fun to meet all of the French people and especially Lina and her family! I’m grateful to have gotten this chance to do this exchange.

I can’t wait until the French people are coming to us!