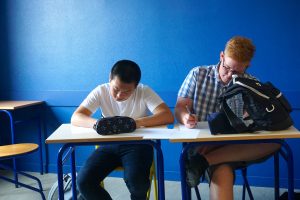 My name is Arthur Taing, I’m one of the French pupil. I’m 16 years old and I’m on my second year in Charlie Chaplin high school. I live in Meyzieu, in Lyon with my family. I have 2 older sisters ; one works, and the other one still studies in high school. My family has foreign origins :we are from Cambodia; every members of the « old » generation speak Khmer (Cambodia’s official langage), some also speak Chinese . Besides, we all speak Teochew (Chinese dialect) more or less well . Although we all have the French nationality.

I think the most exciting thing about hosting a person from Sweden was the fact that is was something new to me, to us. We had never hosted someone before Benjamin. We saw this as an opportunity to interact, and that way, improve our English skills. We wondered how it would be, how he would be ;we were kind of scared.

At the beginning of the stay, the day he arrived, he didn’t say much. He was very tired I guess. On the following days, he remained shy and silent. He told me about his family, friends, and personality, he also gave me explanations about how he acted. As soon as he felt more comfortable, he began to interact more: he was speaking, laughing, and even made jokes. At the end, he was still speaking, laughing, and made even more jokes.

Besides, we learnt a lot of things about their language – they taught us some words – and school /studies programs which are very different from ours.

My family did its best to interact, even though it was hard. Indeed, they don’t speak English very well. My sister spoke a lot with him because she felt awkward for him, and my mother also spoke with him because she wanted to improve her English. My father tried but he doesn’t speak a word of English. He was always speaking French with him and yet I kept saying that he doesn’t. At the end, it became easier for all of us to interact; Benjamin even stayed in the living room to speak with us instead of going up in his room, as he used to do in the beginning.

As an overall impression, I would say that this week has been really rewarding and empowering for us all. We had fun, we learnt things, we bonded. Hope Benjamin feels the same, and enjoyed that week as much as we did.

My name is Benjamin and I am 18 years old. I live in a small town near Köping which is called Valskog. The languages I speak is Swedish and English. The most exciting thing about staying with a new family was to see if any things were different in France compared to my home.

I think our relationship got better and better day by day. Because at first, it was very difficult to start a conversation because we did not know each other very well. One challenge I had was that I was homesick for a few days. I overcome the homesickness by thinking positive. Something that surprised me was that no one really eats snails and frog legs.

What I learned from being in France is that you look up to the elderly people a lot. I learned that you have to plan more in France because almost all the time when we did something we had to stress. If I would compare Swedish school and French school, the French school is more like a prison but I understand why they have so high security. In Sweden, you can just walk in and you don’t have to care about anything special except being in your classes. In Sweden, we don’t have fences around our school like they had at Charlie Chaplin. And if you were in class the teachers were more hard at the students if they did not do what they were told to do.

What I liked about Lyon was, of course, the view from the church we visited, because I saw how big the town really is. I also liked to walk in the old city of Lyon and hear about the history. I didn’t compare Lyon to Köping because Lyon is one of the biggest cities in France and Köping is not nearly one of the biggest in Sweden. I really liked to be in another country because it was my first time to go on a trip without my family. And I liked to visit Lyon.