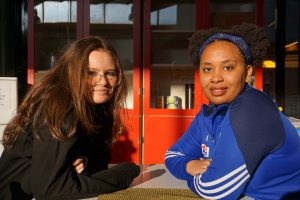 Well, my name is Juliette, I am 16, I live in Meyzieu and I study at the Lycée Charlie Chaplin.

Unfortunately, I didn’t have the chance to spend time with my pen friend Baddryban in France. I actually took part of this project after and I had the incredible opportunity to go to Sweden.

The trip was full of good surprises, like the school Ullvigymnasiet, the students there, the school system, the food, the lifestyle of the Swedish people and the landscapes.

Everything about school is different there and I way prefer it than the French school. Except the building, Iove the system, and the simply way the students can work. First, they can call their teacher by their first name which is not what we’re used to in France. And they finish lessons at 3pm maximum!

My favorite thing about Sweden is to “fika” : it’s a national institution, all the workers have the right to have a break or two during the day and enjoy some coffee and “kannelbulle “ (cinnamon buns).

The Swedes’ lifestyle is way different too, for example they are used to having dinner at 5 or 6pm. Most of the time, French people are still in class at that time. I was also impressed that there is traffic jam at all, it gives the impression that there are much fewer cars that in France, Köping is situated in the countryside

Now, let me tell you about the landscapes. I fell in love with the forests, the frozen lakes, the spots of snow and this blue sky. Even if it was cold outside, these pictures are engraved on my mind. Also my favorite place was Stockholm. I don’t really know why but I fell in love with this city. Besides, the Chapman boat where we slept was very awesome place, and especially the panoramic view of Stockholm from the deck

About my experience in a Swedish family, it had two different experiences so my opinion is quite divided. But even if the two lifestyles were different, I really enjoyed spend time with Baddryban and Johanna who both welcomed me in their families.

Besides, this trip was a personal investment and enrichment because of all the time spent on elaborating the photo project and the presentation about immigration. I also improved my English as it was my only way to communicate there.

So, I really enjoyed this trip and I’ll go back to Sweden as soon as possible! 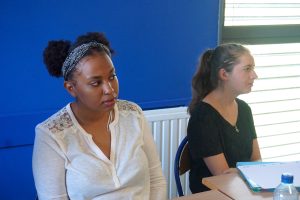 My name is Alice, I am sixteen years old. I enjoy playing flute, traveling and reading. I live in a house in a little town named Meyzieu, near Lyon in France with my parents and my older brother Samuel, who is 18 years old. I also have an older brother Vincent, who is 20 years old. He lives in Paris. Samuel only comes home during the week-end. He is studying really hard to join an engineer school.

I am French, I speak English and French and I am trying to learn germen.

During my pen pal’s stay, we developed a good relationship. Since she arrived, we discussed a lot, laughing and learning about each other. We had a lot of fun! From my point of view, we were a bit shy at the beginning, worried that the other wouldn’t like her. But then, with time, we acted more freely and I think it was the best!

What impressed me the most in their culture was their lunches. At the beginning, I was really worried because my exchange student was eating really lights lunches…  And in France, we eat three big lunches a day and sometimes a small snack at four o’clock. But every time I was eating with her, she was eating almost nothing… It’s only after a few days that I discovered that Swedish persons eat light lunches, but lots’ of snacks between them.  I think it was the cultural difference that shocked me the most.

I think that my family and my exchange student interacted very well. My father was discussing a lot with her about cultural differences, the French history,… With my mom, we were laughing a lot because she made a lot of jokes. We also played a game and it was really funny. My brother played ping-pong with her and they discussed about school’s differences.

I think this exchange was a splendid experience for everyone. It made everyone so joyful and unified. It brought us a new vision about our way of living and made au think about our daily behaviors.