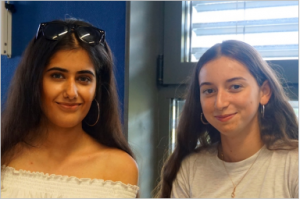 I live in a house in Décines, with my family. I have an older brother, Matthieu, who is 21 and a younger brother, Quentin, who is 14. I live with my parents, Véronique and Manuel. I‘m a French student and few weeks ago, I hosted Khadija, a Swedish pupil who came live at my home for one week.

My grand parents are Portuguese so I know a lot of things about this culture, but I don‘t speak this language. My father does. However, I learn English and German at school. I‘m pretty interested in discovering other cultures, so I was very happy to participate at this exceptional exchange with Sweden !

The thing that was the most exciting for me was to meet a girl, who came from another country, and with whom I could become friend. Before the exchange, I thought that French were very extravagant and demonstrative. But now, I know it‘s wrong. The first day, when I came to the airport to met my penpal, Khadija came directly to me, and said „Lucie“ and hugged me. I was very suprised by the affection she gave me ! So, I felt comfortable with her at once. During the first evening, we talked a lot; about things she had the right to do in France or not, about her life in Sweden, about my life in France… It was so funny to communicate in English ! We laughed so much !!!

Every day, we got to know more about one another. We went canoeing, we visited museums, Perouges old medieval town, Lyon and its auditorium, we shopped together, we watched a French movie ( in french to improve her french but with swedish subtitles ! ), we shared our musics, she tried to play my cello and my violin. I improved so much my English everyday.

My whole family spoke english during the week ! My mum said that Khadija was so great that she had the impression to have another daughter !

The thing that most suprised me was her eating habits. When I spoke with other French students, we all said „they don‘t eat !“ It was weird ! But we discover that swedish people don’t eat much during meals but they eat a little regulary during the day.

To conclude, I have learned a lot of things about Sweden, about Swedish language, I improved my English and I developed a real relationship with my penpal and other swedish pupils, who became friends ! It was very interesting !!!

This exchange opened me to the world. Thanks a lot to all pupils who participated in this amazing exchange, to our school, to Ullvigymnasiet, to our teachers !!!!!